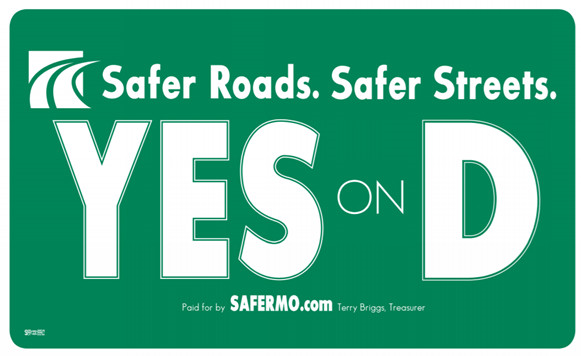 “Proposition D” is a statutory referendum to fund Missouri state law enforcement and maintenance for highways, bridges, roads, and streets. Because Proposition D was referred to the statewide ballot by the General Assembly, Missouri voters will have the final say on this important measure on November 6. 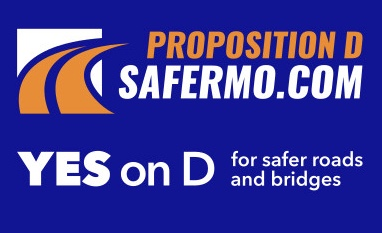 What does Proposition D say?

Here is the ballot language you will see in the voting booth:

Proposition D phases in a 2.5 cents per gallon motor fuel user fee increase each year for four years for a total of 10 cents per gallon. When fully funded, Proposition D will provide approximately $412 million in new money every year to accelerate state and local road, street, and bridge projects.

How does the State Highway Patrol benefit?

The Missouri Constitution requires that motor fuel tax revenues can only be used for: (1) The cost of collecting the revenue, (2) Local and state roads and bridges, and (3) The Missouri State Highway Patrol, for the actual cost of enforcing Missouri’s laws on state highways.

Proposition D will provide funding to state law enforcement, enabling them to be well-equipped to protect drivers and respond to accidents across the state. And when Proposition D is fully phased in, that will free up about $288 annually currently going to the Patrol to be used for local and state roads and bridges.

How will the money be invested?

Thirty percent of Proposition D’s $412 in revenues, which is approximately $124 million, is constitutionally required to flow to Missouri’s cities and counties. The money earmarked for local governments is split 50-50 – cities statewide will receive $62 million and the counties $62 million.

The annual local revenue impact, including the County Distribution and the City Distribution, in southeast Missouri is estimated as follows:

The Missouri Department of Transportation (MoDOT) works with more than two dozen local and regional planning organizations covering every city and county to establish a statewide road and bridge program. The remaining $288 million ($412 million less the City & County share of $124 million) will be utilized to accelerate locally-driven state priority projects. This new funding will enable MoDOT to be able to match available funding from the federal road and bridge funds.

Why does Missouri need to raise the motor fuel user fee?

A lot has happened with Missouri roads and bridges in the last 22 years. The number of annual vehicle miles traveled has increased by 25 million miles. About 6,200 miles of highway lanes have been added to the state road system.  Concrete, steel, and asphalt have doubled and in some cases tripled in cost. The purchasing power of that 17 cents in 1996 is now only about 7 cents. Proposition D will help regain some of that lost purchasing power to accelerate progress on safer roads, streets, and bridges across Missouri.

Missouri now has the second lowest motor fuel user fee in the country. Alaska currently has a lower rate. Missouri has the seventh largest state highway system (34,000 miles of state roads and more than 10,000 bridges), far larger than our surrounding states. However, the state ranks 46th in revenue spent per mile.

How does this impact my wallet?

So, what’s it going to cost me?

According to the MoDOT Citizen’s Guide to Transportation Funding in Missouri, the average Missourian drives 13,476 miles per year in a vehicle that achieves 22 miles per gallon fuel efficiency. That equates to 612 gallons of fuel purchased per year. When fully funded, the motor fuel user fee increase of 10 cents per gallon will equate to an additional $61 per year (about $5.10 per month). That will be your additional investment to provide safer roads for you, your family, and your friends.

You may view the complete Citizen’s Guide to Transportation Funding in Missouri by visiting http://www.modot.org/guidetotransportation/documents/CompleteGuide.pdf

How do I vote in the November General Election?

In order to vote in the General Election on November 6, you must be registered with the Missouri Secretary of State’s Office no later than October 10.

A voter may register in person at one of the following locations:

You may visit the Secretary of State website for further details at https://www.sos.mo.gov/elections/goVoteMissouri/votereg.

Proposition D is a major economic infusion that will provide local communities with jobs, infrastructure, and transportation progress. It’s good for Missouri. It’s good for you.

You may learn more by visiting www.saferMO.com or searching on social media using #saferMO.

On November 6, we encourage you to vote YES for Safer Roads, Streets, and Bridges.