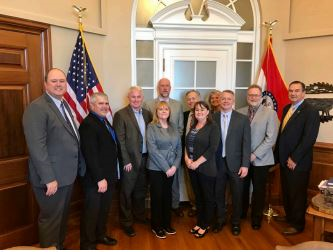 In 2014, on the heels of the defeat of Amendment 7, Stephen Miller, who was serving as Chairman of the Missouri Highways and Transportation Commission, met with a group of transportation stakeholders to discuss the creation of an organization that would be devoted to increasing the awareness of the need for dedicated and sustainable transportation investment in Missouri. That group of stakeholders included Len Toenjes, AGC of Missouri; Bruce Wylie, American Council of Engineering Companies Missouri; Scott Rettig, International Union of Operating Engineers, Local 101; Ed DeSoignie, Heavy Constructors Association of Greater Kansas City; and Julie Lorenz, Burns & McDonnell Engineering.

That group answered Chairman Miller’s call and formed a committee that would become the Board of Directors for The Mercury Alliance. They reached out to Jeff Glenn of GlennView Strategies, who had previously organized the Missouri Transportation Construction Coalition, to enlist his assistance in the building and administration of the organization.

In January 2015, The Mercury Alliance announced its formation and began recruiting members to assist in its mission to promote adequate and sustainable transportation investment in Missouri. Today, the organization has members from around the state including statewide associations, unions, not-for-profit organizations, private businesses, agriculture groups, chambers of commerce, city and county groups, and individuals.

MFTI members receive weekly legislative updates during the legislative session each year as well as other updates on transportation investment in Missouri. MFTI also schedules monthly “Legislative Days in the Capitol” during the legislative session, which are free for members to attend. Attendees for legislative days receive a legislative briefing before going into the capitol and have pre-scheduled meetings arranged with legislative leaders in both chambers of the Missouri General Assembly. Participants are provided with handouts and encouraged to visit with their own legislators to share the need for adequate and sustainable transportation investment in Missouri.

Missourians for Transportation Investment (formerly the Mercury Alliance), working with its partners, has been a key player in efforts to increase transportation investment in Missouri.

In 2017, MFTI was an early champion for the creation of the 21st Century Missouri Transportation System Task Force. MFTI testified in support of the legislation that created the task force and lobbied for its passage. Upon passage of the legislation MFTI submitted a list of names to the Speaker of the House, the President Pro Tem of the Senate, and the Governor for consideration to serve on the task force. Four members of MFTI were selected among the nine citizens appointed to the task force. MFTI attended task force meetings around the state and encouraged members to testify in each region.

In 2018, following a recommendation of the 21st Century Missouri Transportation System Task Force final report, MFTI lobbied extensively for the passage of legislation that would increase the state motor fuel tax. That effort resulted in legislation that placed Proposition D on the ballot in November of that year. Proposition D would have increased the state motor fuel tax by 10 cents over a five-year period. MFTI partnered with other organizations from around the state to educate voters on the need for additional transportation investment. Although Proposition D was rejected by voters, the margin of defeat was narrowed significantly from Amendment 7, four years earlier. Members of MFTI’s Board of Directors developing legislative policy for the 2020 legislative session.

In 2019, MFTI began hosting weekly advocacy calls among association executives and lobbyists who are regularly in the capitol to provide a platform for collaboration and coordination on legislative efforts. Additionally, MFTI moved from hosting one Legislative Day in the Capitol to hosting five such days (one/month) during the legislative session. 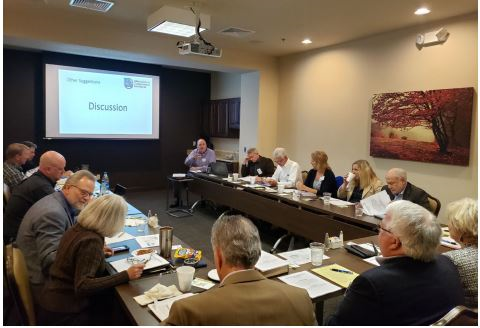 Missourians for Transportation Investment has spent the last 5 years working diligently to increase the awareness of the need for additional transportation investment in Missouri. We look forward, with the participation and support of our members and partners, to continuing that mission.