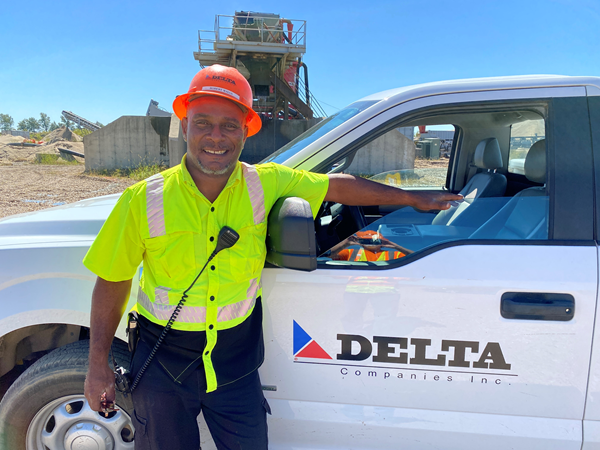 One wife, three children, nine grandchildren, and five pit bulls. You might say Robert Walls has a lot to supervise besides a sand and gravel operation in Dexter, Missouri.

After graduating from Union High School in Grand Rapids, Michigan, he held numerous jobs in Michigan and later in Missouri learning different skills. Robert looks for new opportunities to challenge and improve himself (more about that later). In March 2015, he joined the Delta Companies Inc. as a “groundman” or laborer at the SEMO Quarry. Over the next five years, he worked through various positions at the Quarry, including Haul Truck Driver, Primary Plant Operator, and Secondary Plant Operator. Then in early 2020, Robert was promoted to Plant Supervisor in Dexter. He said this was his biggest surprise and favorite moment with Delta so far.

In his new position, the Holly Springs, Mississippi native operates the plant and manages the yard crew. He says the crew — Bill, Luke, and Levi — really do all the work; he is just there to help. He also approaches his role with a determination to make decisions that better the company.

He used that same philosophy as a member of the Delta Safety Steering Team from 2018 to 2020. His role was to help make decisions to improve the safety culture of the company. He demonstrated those decisions by leading Safety Meetings, submitting SHIELDS, developing SOPs, and mentoring new hires. We are confident he will continue to do so in his new role and new location.

Robert and his wife, Pamela, live in Oran, Missouri. He wisely refers to her as his “better half,” which may explain why they have been married 33 years. They have three children: Amelia (32), Robert, Jr. (29), and Chastity (27). Their home is filled sometimes with 9 grandchildren, but is always filled with five pit bull dogs: Pretty Girl, Pretty Boy, Storm, Cookie, and Beauty. Robert enjoys fishing and martial arts, specifically Jiu-Jitsu and Taekwondo, where he holds a First-Degree Black Belt.

Robert’s passion is ministering the Gospel. Perhaps that is the source of his calmness in times of stress and intensity to find solutions. He is the minister for a small church near his home. Therefore, it is no surprise that his favorite book is The Bible and his favorite quote is from Revelations: “I stand at the door and knock.”