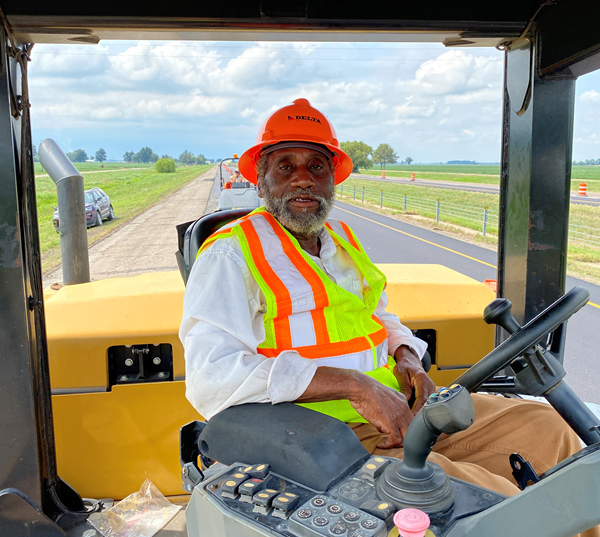 What were you doing in June 1974? Can you remember? Were you even born yet?

Arthur Watkins knows exactly what he was doing. He was working for the Delta Companies Inc. in Arkansas. When asked why he chose to apply at Delta, he replied, “It was right across the street from my house,” referring to the HMA Plant in Luxora, Arkansas.

Born in Luxora, he graduated from Luxora High School, and has lived in Luxora all his life. In fact, his first job out of high school was performing maintenance services, such as mowing and street cleaning, for the City of Luxora.

For more than four decades, Arthur has operated a roller on a Delta paving crew. His biggest surprise through all those years is the quality of the equipment and all the innovative options available now. He recalls pulling a power broom behind a pickup truck to sweep streets; now they have enclosed cabs and air-conditioning. At times, he has helped at that same HMA Plant he first saw many years ago, operating the loader and working around the plant.

When not compacting asphalt for Delta, he likes to do a little fishing and tend to his vegetable garden. His mother, who is still working in her own yard, gave him an appreciation for flowers, so he always maintains a nice flower garden as well. When the weather prevents him from working or sitting in the yard, he works on his old coin collection. He prefers the pennies.

When asked his favorite part of working at Delta, he replied: “Laying city streets. I get to see a lot of people I know.” After 46 years of laying asphalt around northeast Arkansas, Arthur knows a lot of people!