The QIC Award recognizes a company’s commitment to building high-quality, smooth, durable pavements for the customer – the driving public.

NAPA requires quality control information, engineering data, and feedback from the contracting agency as part of the award nomination application. Contractors submit quantifiable data, including test results and quality control standards. An affidavit from the contracting agency provides qualitative information regarding the customer’s level of satisfaction with the contractor’s job performance, work quality, and delivery schedule.

The judging criteria includes Gradation, Asphalt Cement Content, Plant Air Voids, and Density. Nominations are reviewed and scored by pavement engineers at the National Center for Asphalt Technology (NCAT) at Auburn University. If the project meets the high standard of quality and performance, then and only then will the project earn a Quality-In-Construction Award. 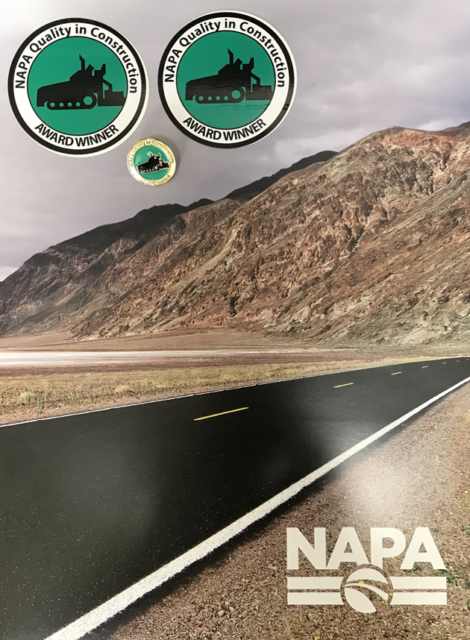 Our crews in Arkansas earned four; the crews in Illinois earned two; and our crew in Missouri earned two more for a total of eight QIC Awards. A brief description of our award-winning projects is listed below:

·         Work on SH 140 in Mississippi County. When the company realized there was not enough material on the road’s shoulder to allow for widening, it partnered with the Arkansas Department of Transportation (ArDOT) to develop a new plan. Despite the limited availability of reclaimed asphalt pavement (RAP) in the area, Delta Asphalt used both RAP and steel slag in the project mixes, conserving natural resources. Shane Moody was the supervisor in the field and Don Brumley was the supervisor at the Luxora HMA Plant.

·         Work on SH 16 in Cleburne County. The company used sustainable paving techniques. Despite the limited availability of asphalt millings in the area, it incorporated 20 percent or more RAP in the mixes. It also used warm mix asphalt, which requires less heating than hot mix asphalt, thus reducing greenhouse gas emissions. Sid Binkley was the field supervisor and Clint Clark was the supervisor at the Clinton HMA Plant.

·         Overlay of US 67 in Clay County. The company exceeded all the ArDOT’s specifications for the quality of its asphalt mix and for its workmanship in producing the pavement. Delta Asphalt completed the construction in a timely manner and with minimal inconvenience to the traveling public. Wade Murray was the supervisor in the field and Andy West was the supervisor at the Paragould HMA Plant.

·         Work on various roads in Georgetown. The company used rollers with intelligent compaction systems to ensure that the 1.5-inch overlay was consistent on all roads. It also incorporated sustainable paving techniques into the project, using 15 percent RAP in the project mixes, as well as warm mix asphalt technology. Wade Murray was also the field supervisor on this project and Chris Allen was the plant operator at the Searcy HMA Plant.

·      Work on 6.3 miles of I-64 in Jefferson County. The project included patching and repair to the existing pavement, plus milling and overlay of the road. This was a pay-for-performance project that was the first in this Illinois Department of Transportation (IDOT) district to require the contractor to meet a minimum flexibility index for the road. Southern Illinois Asphalt used RAP in its mixes. Chad Phillips was the supervisor in the field and Ben Klebba was the plant operator at the Mt. Vernon HMA Plant

·         Work on IL-166 in Williamson County. The project scope included milling followed by the placement of a leveling course of Superpave asphalt and a 1.5-inch overlay of Superpave surface course. The company used rollers with intelligent compaction technology to achieve the desired density and smoothness. Both the leveling and surface courses contained RAP. Paul Rydgig was the paving supervisor on the project and Ken Watson was the plant operator at the Buncombe HMA Plant.

·         Overlay of Routes ZZ and AD in Stoddard County. Apex Paving completed the construction on schedule while minimizing inconvenience to the traveling public. Joe Colbert was the supervisor in the field and Austin Williams was the supervisor at the Poplar Bluff HMA Plant.

·         Overlay of Route 91, Route N and Route B in Bollinger, Stoddard and Cape Girardeau counties. Despite the limited availability of RAP in the area, Apex Paving Co. incorporated 25 percent RAP into the project mix. Joe Colbert was also the field supervisor on this project and Amos Taylor was the supervisor at the Cape Girardeau HMA Plant.

“We are proud of our crews (paving crews, HMA plant personnel, and quality control technicians) for earning this national recognition. However, it comes as no surprise to me because this is the quality of performance these people deliver every day,” said Delta President Zach Green when informed of the eight awards.

Dan Gallagher, 2017 NAPA Chairman, stated during the Award ceremony: “The asphalt pavement industry is committed to building high-quality projects that deliver superior performance to the traveling public. All contractors’ projects earning a Quality-In-Construction Award are measured against best practices designed to live up to that commitment.”

You may learn more about the National Asphalt Pavement Association by visiting www.AsphaltPavement.org and the National Center for Asphalt Technology at www.ncat.us/.