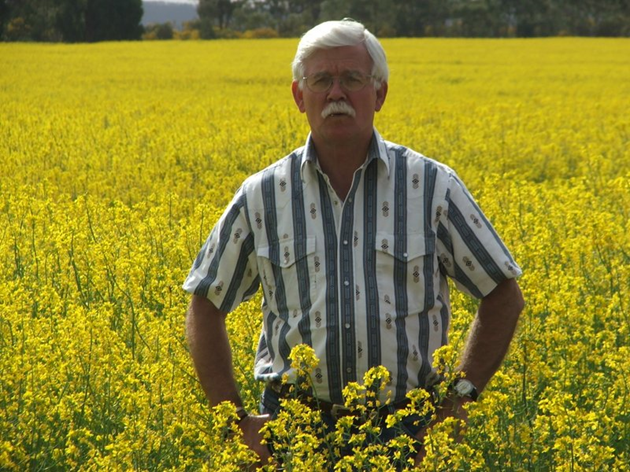 The third in a series of articles by Neal Kinsey with KinseyAg aimed at helping growers improve both crop and livestock nutrition by improving the productivity of the soil.

Loss of nutrients to water During each growing season, in certain agricultural cropping areas, rainfall can be heavy to excessive at times. For many areas this can be especially true in the winter and spring months. Combined with high yields, extra water can have a very detrimental effect on soil fertility. Growers with fields that have been heavily irrigated can experience the same type of problems.

In many fields too much water has caused some fertilizer nutrients needed for good crop production to be leached, or washed downward out of the topsoil. This is especially true for nitrogen, sulfur and boron, as is generally expected to be the case. But under the right conditions, calcium is another element that can be lost due to high amounts of water. As shown by soil tests, in order to avoid the loss of crop yields, more liming needs to be done in many areas. Yet in recent years less emphasis seems to have been given to the importance of liming than has been the case in the past.

The need for limestone to increase crop yields has become a significant factor in more and more fields. Some fields being checked for calcium losses on a continual basis have changed drastically within three or four years. Such changes are particularly expected on fields that do not have a history of good liming practices, and on fields that receive inordinate amounts of nitrogen or sulfur from whatever source.

Watch that limestone! But just applying some type of lime to correct the pH is not generally the best answer. In fact, some of the fields that have received high magnesium (dolomite) lime can still have an adequate pH, and yet be limiting your crop yields. This is because the levels of three other crop nutrients, in addition to magnesium, can greatly influence crop yield, and a need for them may not be properly reflected by the pH.Calcium, potassium and sodium are the other elements in question. If soils have too much magnesium (or too much of any one of the other three), the pH can appear to be okay or even too high, when in fact the soil does not have enough of one or more of the other three nutrients needed to produce at its best.

You have to balance the nutrients The only way to know what is actually the case is to have a detailed soil analysis run on the soils. Such testing must measure the levels of each nutrient properly. For those who are new to our soil fertility program the test procedure which we use provides these answers. And from this analysis it can be determined what lime, and how much, is needed from the various available sources. Just putting on lime is definitely not the best route to take! Too much high calcium lime (or calcium from other sources such as manure from laying hens, finely ground oyster shell, ground marl rock, and in some cases gypsum, soft rock phosphate, or even compost) can tie up nutrients. This includes potassium, phosphate, boron, iron, zinc, copper, magnesium and/or manganese.

High-magnesium lime Dolomite, or high-magnesium lime, can cause problems too. When dolomite is applied in too large of a quantity it can cause an excess in magnesium and have a negative effect on yields. The problem is it can be as long as three years after the excess lime has been applied before seeing the greatest amount of potential damage to the crop yields. By this time, unless the grower has kept good records, a connection between the liming and declining yields may be overlooked. (A moral here is to keep good records of when, where, how much and what type of lime each field receives.) Have you applied dolomite lime on any of your fields in the last few years? If so, count three crop years from the time of application and check the yields that year and thereafter as compared to yields prior to liming. Even if the applied magnesium from dolomite lime will have a detrimental effect, do not expect to see that yields have dropped the first year.

For example, when too much dolomite is applied to land for cotton, it can eventually cause the plant to send out two lesser roots instead of one longer taproot. These roots do not go straight down, but curve to one side instead, and have less depth than the one taproot would normally have. (If you rip and hip, this effect will not always be as evident.) It will take three years to see the full negative effects of overusing dolomitic limestone. But when overused, once those effects have come into full effect it can cost a cotton farmer about Â¾ bale of cotton per acre, every year, until the problem is corrected!

Excess magnesium costs money In corn, on medium to heavy soils, a high level of magnesium (15%+) costs the farmer 10 bushels of corn per acre. Above 20% magnesium on the soil test reduces the yield by another 5+ bushels per acre. In addition, it will require more nitrogen to produce each bushel of corn every year until the problem is corrected. In legumes, taking soybeans as an example, 13-14% magnesium levels can cause 10 bushels per acre loss per year, even when all other nutrients are present in the proper amounts

Be sure what your soil really needs. Even though too much, or the wrong type of lime can cut yields, limestone should always be applied where shown to be needed. Applying the proper amount of lime in the right form can provide far greater increases in yield than the losses that occur from misuse. Have your yields suffered in certain fields in the past few years? If so, avoid the mistake of failing to correctly check for and properly apply any lime that is needed. Just be sure that you use enough to correct the problem, but not so much that it causes problems three years from now and several years thereafter. If there is a need for lime, autumn is the best time to spread it for next Spring’s crops. Do it correctly as needed and see the difference liming can make for crops over the next several years.